Under the tab Data Cards, besides the Type Plate (“Typschild”) all W113 vehicles also had a Body and Paint Number Plate (“Karosserie- und Lackierungsschild”), which was an aid to production and most importantly always acts as a true reference to its original color.

During the course of W113 production, this Body and Paint Number Plate enjoyed two locations. On the early 230 SLs, up to serial number 001175, the plate was affixed to the A-pillar, aka the door jamb, and it was obviously affixed after the body had been painted.

The information on the plate includes the “Baumuster” (the first 8 digits of the VIN) and the “Aufbau” (Body) number, and in the next line the color codes and paint manufacturer for both the lower body as well as the hardtop and hubcaps, if fitted with a hardtop. Since production needed body identification before the painting process, the “Baumuster” (the first 8 digits of the VIN) and the body no. were stamped on the relay holder bracket underhood. Not very legible on a photo, since it is painted, this example shows the numbers 113042 12 00881, where of course the latter 5 digits are not the VIN (which would have 6 digits anyway) but the body no.

Around early 1964, the Body and Paint Number Plate was relocated underhood onto this relay holder bracket between the brake booster and the left side fender. It was affixed earlier in the production process and thus underwent the paint process.

The layout of the numbers on the Body and Paint Number Plate has also periodically changed in series production; the following picture shows a 280SL built in September 1968 as a MY 1969 US version. Obviously, this plate contains many more codes than the early plate version shown above.

This second version of the Body and Paint Number Plate contains the following information:

If a W113 was delivered without the optional hardtop, i.e. as Roadster, there were dashes at the location for the color code for the hardtop.

The 6 at the end of this line (the hardtop code) is the last digit of the code entered in code box 41 (here code 416, hardtop mounted, softtop folded). The possible codes are as follows:

The distribution codes are described in Country Codes.

In this example, the body no. is 84738, and the number 4738 is stamped into the hood, hardtop, softtop and transmission support.

At the beginning of line 4 there is a dash, some cars have a one-digit number, or a letter, for example an “M”, as shown below. The Zn-galvanised plate was attached to the bare metal before painting and these marks were instructions for the subsequent painting process.

The “-” indicated that a combination of normal and metallic paint was to be used; an “M” required a metallic paint, and a”0″ indicated a standard paint with a differentiation in the amount of pigmentation (light or dark) as indicated by a “6” (information source: Manfred Luft: Technik und Codenummern; MB Club Pagode – Deutschland) 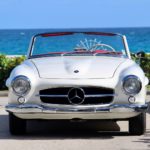 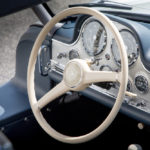 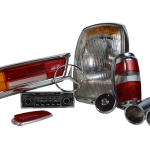 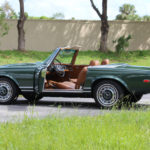 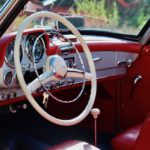 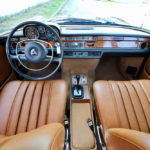